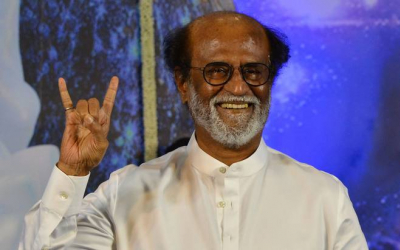 Rajinikanth was born on 12 December 1950, in a Maratha family in Bangalore, Mysore State (present day Karnataka). His mother was a housewife,[a] and his father Ramoji Rao Gaekwad, a police constable. He was named Shivaji Rao Gaekwad after Chhatrapati Shivaji, a Maratha warrior king, and was brought up speaking Marathi at home and Kannada outside. Rajinikanth's ancestors hailed from Mavadi Kadepathar, Pune, Maharashtra and Nachikuppam, Krishnagiri district, Tamil Nadu. He is the youngest of four siblings in a family consisting of two elder brothers (Satyanarayana Rao and Nageshwara Rao) and a sister (Aswath Balubhai). After his father's retirement from work in 1956, the family moved to the suburb of Hanumantha nagar in Bangalore and built a house there. When he was nine years old, he lost his mother.

At the age of six, Rajinikanth was enrolled at the "Gavipuram Government Kannada Model Primary School" where he had his primary education. As a child, he was studious and "mischievous" with a great interest in cricket, football and basketball. It was during this time that his brother enrolled him at the Ramakrishna Math, a Hindu monastery (math) set up by Ramakrishna Mission. In the math, he was taught Vedas, tradition and history, which eventually instilled a sense of spirituality in him. In addition to spiritual lessons, he also began acting in plays at the math. His aspiration towards theatre grew at the math and was once given an opportunity to enact the role of Ekalavya's friend from the Hindu epic Mahabharata. His performance in the play received praise from the audience and Kannada poet D. R. Bendre in particular. After sixth grade, Rajinikanth was enrolled at the Acharya Pathasala Public School and studied there till completion of his pre-university course. During his schooling at the Acharya Pathasala, he spent a lot of time acting in plays. In one such occasion, he performed the villainous role of Duryodhana in the play Kurukshetra (Anand iya Vaalka).

Upon completion of his school education, Rajinikanth continued to perform various jobs in the cities of Bangalore and Madras, including that of a coolie and carpenter, and finally ended up being recruited in the Bangalore Transport Service (BTS) as a bus conductor.He began to take part in stage plays after Kannada playwright Topi Muniappa offered him a chance to act in one of his mythological plays. During the time, he came across an advertisement issued by the newly formed Madras Film Institute which offered acting courses. Though his family was not fully supportive of his decision to join the institute, his friend and co-worker Raj Bahadur motivated him to join the institute and financially supported him during this phase. During his stay at the institute, he was performing in a stage play and got noticed by Tamil film director K. Balachander. The director advised him to learn to speak Tamil, a recommendation that Rajinikanth quickly followed.
Shivaji Rao Gaekwad (born 12 December 1950), known by his mononymous stage name Rajinikanth, is an Indian film actor who works primarily in Tamil cinema. He began acting in plays while working in the Bangalore Transport Service as a bus conductor. In 1973, he joined the Madras Film Institute to pursue a diploma in acting and also mastered speaking Tamil language as his mother tongue was Marathi. Following his debut in K. Balachander's drama Apoorva Raagangal (1975), his acting career commenced with a brief phase of portraying antagonistic characters in Tamil films.