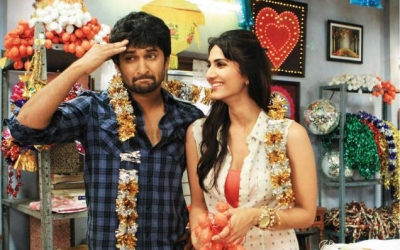 Movie Name
Aaha Kalyanam (2014)
Movie Name (in Tamil)
ஆஹா கல்யாணம்
Starring
Nani, Vaani Kapoor
Music
Dharan Kumar
Year
21 February 2014
Lyrics List
Story
Shakthivel (Nani) is street-smart and fun-loving. Intelligent and quirky, Shruti (Vaani Kapoor), who assists the wedding coordinator, sees Shakthi at the front of the food serving line and suspects that he is gatecrashing to eat for free. She confronts Shakthi, who quickly summons his friend, the videographer at the wedding, and pretends that he is part of the film crew and has a right to be there. After seeing her dance at the wedding, Shakthi cannot resist the temptation to make a video of Shruti doing her dance routine.

The next day, Shakthi calls those involved in the wedding and manages to get Shruti's name and her college. He then chases her down on her bus ride home and tries to impress her with a DVD of her dance routine at the wedding. Shruti is not interested in Shakthi and reveals that her main interest in life is starting her own wedding planning business by the name 'Getti Melam'. Shakthi's enthusiasm for courtship is quickly dampened once Shruti launches a long pitch of her business ideas.

Shakthi, meanwhile is under pressure from his parents to come back to their village and work on their sugarcane fields, and Shruti is being coaxed by her family to get married at the earliest. But Shruti makes a deal with her parents that after her exams, she will take five years to get her business running before getting married. When Shakthi's father comes to take him back to his village, Shakthi refuses and lies that he is starting a wedding planning business. He now goes back to Shruti who refuses him as she was worried that romantic complications would arise. Shakthi promises that it will never be a problem, but Shruti is not interested.

Shruti goes to meet with Chandralekha (Simran), a famous wedding planner, with Shakthi tagging along. She hopes that she will be hired and get the opportunity to learn about planning "high-class weddings". Chandra shows no interest, but by sheer coincidence loses one of her male workers at that moment. Short on time, she spots Shakthi next to Shruti, and offers him the job. Shakthi accepts only on one condition that both him and Shruti are hired together. While checking the arrangements, Shruti learns that Chandra is cheating her clients by ordering cheap arrangements of flowers and decorations so she can earn more commission. Later, when an irate bride's father confronts Chandra, she blames Shruti, claiming it was her fault. Angry at Chandra for accusing Shruti, Shakthi yells back that she has no right to treat her employees like this. They quit and Shruti, calling him her partner, leaves with him, warning Chandra that they will cross paths.

The two thus begin "Getti Melam", with the work equally split between the two. Their first project is very successful and the duo plans many more small weddings. Finally, they get their first big client by stealing them away from Chandra. After a lot of work the wedding is a huge success. That night, after the event, they dance to celebrate and both end up slightly drunk. A simple hug turns into more, and the two make love that night. Afterwards, Shakthi lies awake all night, worried about what had happened.

When Shruti starts calling him "dear" in the morning, he is obviously uncomfortable with it. Not wanting to hurt her feelings, Shakthi behaves awkwardly around her over the next few days, while Shruti realizes that she has fallen in love with him. Shruti tries to reassure Shakthi that she's not like other women he's been with who follow him around everywhere. Shakthi, misunderstanding, believes that she's telling him that the night didn't mean anything to her. Relieved, he tells her it meant nothing to him as well. Shruti pretends to agree but cries after he leaves. This creates a tense atmosphere between the two. They have a huge fight resulting in Shruti breaking the partnership and forcing Shakthi to leave the company. Shakthi vows to start his own wedding planning business and the two go their separate ways. However, they don't do as well by themselves, unable to handle the workload without their partner and both enterprises end up suffering huge losses, plunging them into debt.

They finally get a big contract, but it is contingent upon them working together as a team. The bride had been a guest at the first big wedding they'd done and wanted the same level for her own wedding. Facing creditors, they agree to partner up again for this one wedding for the sake of recovering their own losses. They divvy up the workload and each focus on their own departments. Shakthi and Shruti perform together for the wedding. The performance is a success and the next day, Shakthi tells Shruti that they should be partners again, saying that Getti Melam was never as successful as when they were together. Shruti refuses his offer, telling him that she is getting married in two months to her fiance, Siddharth, and will move to Dubai with him after the wedding. Shakthi is stunned and immediately argues with her that she can't get married, saying it is "totally wrong".

During the rest of the wedding preparations Shakthi pesters Shruti about her engagement, claiming that she'd be moving too far from her parents or that Dubai wouldn't suit her. When none of those reason dissuade her, Shakthi accuses her of her getting married to make him jealous, claiming that she'd fallen in love with him and that this was a way to get revenge because he paid her no heed after their night together. Shruti answers that she is not doing it for revenge, but for her own security and her parents' satisfaction to see her well-settled in life. She admits that she did fall in love with Shakthi, but since he didn't feel the same, she had moved on. Shruti answers a call from Siddharth and walks away sadly, leaving Shakthi alone.

At the sudden thought of losing her forever, Shakthi realizes that he has always been in love with Shruti, but was too scared to acknowledge it in fear of jeopardizing the business. Desperate to win her back, Shakthi steals Siddharth's phone number from Shruti's cell and calls him, telling him to back off and that Shruti was his. Hearing what Shakthi had done to Siddharth, Shruti angrily runs off to find Shakthi and confronts him where he is waiting for her on a rooftop. Shakthi tells Shruti that he'd loved her all along and was a fool to have run away from her love. Shruti calls off her engagement and the two share a passionate hug.