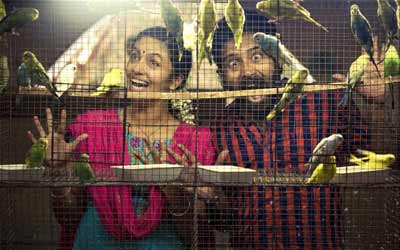 Movie Name
Cuckoo (2014)
Movie Name (in Tamil)
குக்கூ
Starring
Dinesh, Malavika
Music
Santhosh Narayanan
Year
21 March 2014
Lyrics List
Story
Tamizh is a visually-impaired young man who works as a singer for an entertainment troupe. During one of the weddings he performs at, he meets Sudhanthirakodi, a young woman, who is studying to become a teacher and is also visually-impaired. Tamizh teases her, causing her to leave him waiting for her as she presents her wedding gift to the newly weds and leaves. The following day, he bumps into her on the train and asks his friend to mislead her into getting down at a wrong station. As a result, Kodi is late for her first day of teaching practice. She and her friends then go after whoever who tricked her. The next time he gets on the train, Tamizh candidly talks to his friend about how they played a prank on Kodi the other day, not realizing she is right in front of him. Angered, she hits him with her walking stick, causing him to bleed. Tamizh is embarrassed and is angry when his friends tease him about the incident. However, Kodi feels bad for what she did and apologizes to him the next time they meet. As their friendship grows deeper, Tamizh falls in love with Kodi. With the help of his friends, he composes a romantic poem for her which he records in a CD. When he goes to meet her at her school, he slips the CD into her bag, only to learn from her best friend that Kodi dreams of marrying a person who can see. She has always hoped that Vinod, the young man who volunteers reading to her at the service center will propose to her. On that very day, Vinod takes Kodi out for lunch to show her a surprise. Thinking that he is going to propose, she happily follows. However, she is heartbroken when Vinod introduces her to his fiance, who plans to make Kodi her charity case. When she returns home, she is surprised to find Tamizh's CD and is touched when she listens to it. Later, Tamizh goes through much difficulty to find Kodi's favourite clock with her late father's voice recording as the alarm. Realizing how much Tamizh is in love with her, Kodi finally learns to love him back. However, her greedy elder brother had promised to marry her off to someone else in return for a favour, forcing her and Tamizh to elope. Tamizh manages to obtain enough money to pay off Kodi's brother, but he is tricked by a group of corrupt policemen before being hit by an oncoming van. Unknown to him, Kodi is also in the van on the way to meet him. As they are both silent throughout the journey, neither of them realize the other is also in the van. When Tamizh has finally recovered from the accident, he finds that Kodi has left Chennai to stay away from her brother's family. After a period of time, a reporter friend tells him Kodi was seen in Mumbai. Tamizh goes to the city in search of his one true love and they are finally united.