Embittered and angry against the society, Muthuveeran kidnaps at random of a meeting, in a park of Saïgon, Soundharam (MGR), the unique heir of the billionaire Selvaragham (MGR), then baptizes him of the first name of Pandhiya and the pupil as his own son in India, in the mountains, where he is, at the moment, at the head of a community compound of bandits and their family, living outside the system.

The disappearance of the son arouses at the close relation of the fantastically wealthy father, the greed.

So, Kumar (R. S. Manohar), the Kanagamaligai Estates 's manager, in the Tamil Country, (belonging to the late Selvaragham) and his father, in Saïgon, plan false Soundharam.

By a terrible combination of circumstances, false Soundharam falls in a trap led by Vélaiya (M. N. Nambiar), a strong head (from Muthuveeran 's group) and stabs him lethally.

The latter reviled in the arms of Pandhiya revealing him the black intentions of Kumar, and by confiding a bag filled with proofs.

Now, accused hastily of the murder, by a diligent policeman, Chézhiyan (S. A. Ashokan), Pandhiya decides in his turn, to put on the role of Soundharam, to save claws of Kumar, his maternal uncle Kanagarathinam (Sethupathi[4]) and his daughter Mâla (K. R. Vijaya), that with he has to get married.

But Pandhiya already loves another woman, beautiful Kannagi (B. Saroja Devi) and mutually !

But overcoat everything, he has to for his of the mountain, to take out them of the obscurantism, to look for the leniency of the justice, to give them a better life, a new future !

At the moment, the "prodigal son" is faced with a sum of problems.

As he summarizes it so well in front his father 's portrait :

...You've passed away making me the heir for many lakhs of property ! I 'm the billionaire Soundharam & Pandhiya who blamed for the murder ! I 'm the lover for Kannagi & and an engaged groom for Mâla ! God ! I 'd correct my brothers who are in dark and give them live ! In another side, i 'd save this family from the hands of this tricky Manager ! What can i do Dad ?... 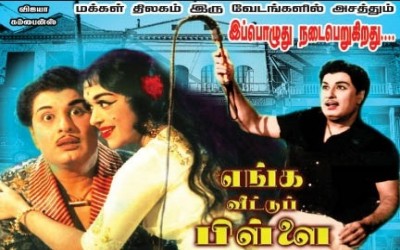