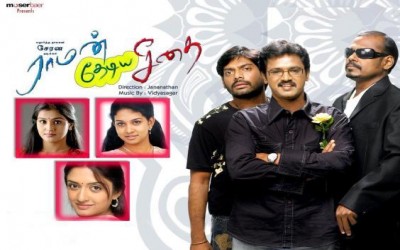 Movie Name
Raman Thediya Seethai (2008)
Movie Name (in Tamil)
ராமன் தேடிய சீதை
Starring
Cheran, Pasupathy, Nithin Sathya
Music
Vidyasagar
Year
19 September 2008
Lyrics List
Story
The first few scenes themselves set the tone; first, a hesitant and bashful Venugopal (Cheran) trying desperately to carry on an interesting conversation with a prospective bride Ranjitha (Vimala Raman), in her picturesque home in Nagercoil. The conversation proceeds quite well in the beginning, until it hits an unexpected snag—Venu was hospitalised for extreme stress during his school years; he still stammers as the result of the strain, and when he's unexpectedly put into stressful situations. Ranjitha, unimpressed with the story and wary of his behavior, rejects him.

And thus begins the saga of this modern-day Raman who owns a wedding invitation design shop (a refreshing change of scenery, where you see the working of this unique business), works with beautifully crafted invitations, alliances, marriages and bride/grooms but somehow, he's never successful when it comes to his own wedding.

A second alliance is arranged, this time with Vidya (Ramya Nambisan), which actually gets to the wedding-day, but then goes down the tubes. Vidya elopes with her lover the day before her marriage, leaving her father Manickavel (Manivannan) distraught and furious. Remorseful, he promises that he will make sure Venu gets the perfect bride, as a sort of penance for his own daughter's fault.

But life holds no cheer for Venu, who's scarred by depression and by the feat that perhaps he's just not the man who will ever experience romance or marriage. But life has a few surprises in store for him.

A rather charming story unfolds now, in the form of Nedumaran (Pasupathi), a blind radio jockey, whose mission is to inspire people and inspire he does, as he outlines his own emotional love story with Thamizhisai (Gajala), whose steadfast love made him believe in himself. Nedumaran's zest for life and obviously joyous marriage inspires Venu, who continues on his hunt.

Another prospective bride Gayatri (Karthika) is interested, frank and pretty but she has a back story too; a hilarious, touching one, involving a reformed thief, Gunasekar (Nithin Sathya). Venu turns away, dejected, only to approach an inspector, Senthamarai (Navya Nair, in a cameo). But just when he's stunned by the twists and turns thrown by fate, destiny suddenly re-aligns itself. 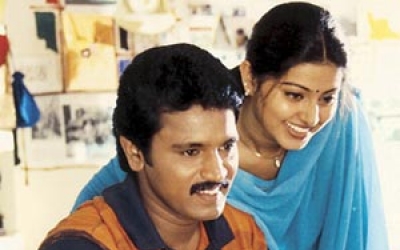 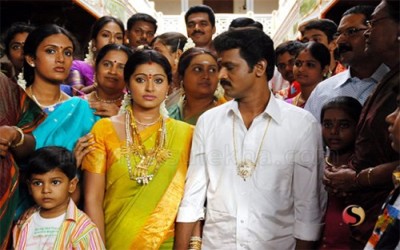 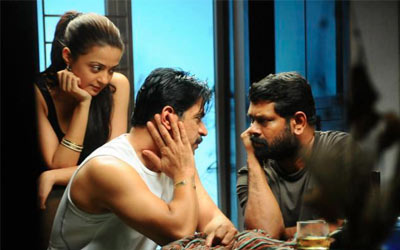