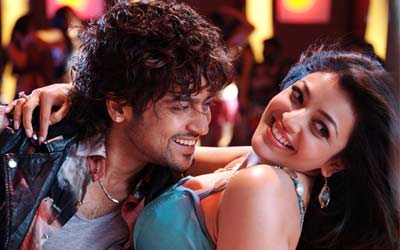 Movie Name
Maatraan (2012)
Movie Name (in Tamil)
மாற்றான்
Starring
Suriya, Kajal Aggarwal, Sachin Khedekar, Tara
Music
Harris Jayaraj
Year
12 October 2012
Lyrics List
Story
Ramachandran (Sachin Khedekar) is a genetic scientist who doesn't get due credit and funds for his research. He tries creating a human with several talents through baby designing, which thus leads to the birth of his sons, who are conjoined together above the waist. Since they share a common heart, doctors suggest a sacrificial surgery, to which their mother Sudha (Tara) objects.

They begin raising their children, Vimalan and Akhilan (both played by Suriya). In the following years, Ramachandran makes it big with the help of Sudha. His company, Locus Lacto Products, makes huge profit through their product "Energion", the top-selling children’s powdered milk energy drink in the market.
Vimalan and Akhilan are poles apart in character, the former being decent and good at studies while the latter is care-free and poor at studies. Anjali (Kajal Aggarwal) joins their company as a translator. Both Vimalan and Akhilan fall for her. She, along with her Russian friend Volga, a journalist, spend their time with the brothers. Meanwhile, Anjali falls for Vimalan and Akhilan is happy for them.

Volga is then revealed to be a spy who tries to steal the trade secrets of Energion. She is exposed and sent out by Ramachandran. She then takes the brothers to their cattle farm under the pretext of an interview where she takes pictures and even collects a milk sample from their farm. When Vimalan questions her, he is warned by her that Energion was an adulterated product and could lead to the death of thousands of children. She also exposes their father of killing the head of their R & D department and setting the lab on fire, thereby destroying evidence. Consequently, she is murdered, but, she swallows a pen-drive containing evidences of the foul-play before dying. Anjali acquires it from the person who performs Volga’s autopsy. She hands the pen-drive over to Vimalan. Following this, Vimalan and Akhilan are confronted by goons who try to get the pen-drive from him. Akhilan is convinced that the attack was only meant for robbing them. During this fight, Vimalan suffers a huge blow on the head.

Vimalan is declared brain-dead and his heart is transplanted into Akhilan. After the twins are separated through a surgery, Anjali grows closer to Akhilan. Sudha is warned that Energion is adulterated and she confronts her husband who asks the food safety department to raid their company. But to her surprise, Energion is declared safe and hygienic. Meanwhile, Akhilan discovers that his father is behind Vimalan’s death by tracking his assistant, Dinesh (Ravi Prakash). He gets hold of the pen-drive that contains several photos, where ingredients used as cattle feed at their farm are declared as no feed. The beginning of the scheme is traced back to the fictional republic of Ukvania.
Accompanied by Anjali, Akhilan sets out to solve the mystery. They get her friend Ashok’s help, but he is subsequently killed. The photos are revealed to be athletes who were competing as Unified team under the olympic flag in the 1992 Barcelona Olympics. The athletes were declared dead in a plane crash.

The investigation leads them to the army medical research centre. The truth is then revealed that Energion was originally an undetectable steroid invented by Ramachandran to improve the performance of the athletes at the world games. Though the country performed well, some of the athletes began suffering from similar health problems leading to their deaths and that their death from a plane crash was faked to avoid national shame. They also learn that the adulterant in Energion could be detected only with the addition of ionization enhancer. After being assaulted by a local mafia led by Dinesh, Akhilan manages to kill him and takes the remedial ingredients back to India.

Once they are in India, Ramachandran is exposed and is about to be arrested. Akhilan requests his father to surrender but however, he discovers his father’s ugly side and finds out that he and his brother are just a result of their father’s failed experiment. Ramachandran also states that he used the whole society as his research lab, through Energion. His leg is then crushed by a rock after being unsuccessful in killing his son. Akhilan then leaves his father to die at the hands of rats which chew on his flesh.

Akhilan gets National recognition for bravery. He later gets married to Anjali, and the couple subsequently become parents to conjoined twins. 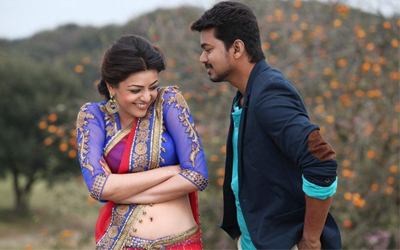 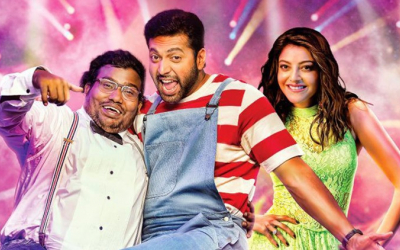 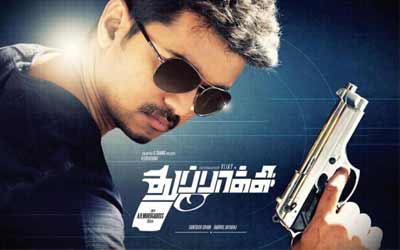