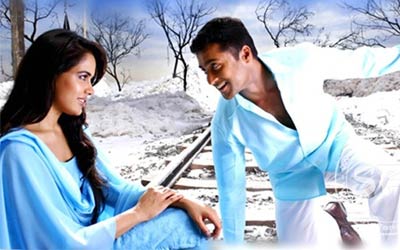 Movie Name
Vaaranam Aayiram (2008)
Movie Name (in Tamil)
வாரணம் ஆயிரம்
Starring
Suriya, Simran, Sameera Reddy, Divya Spandana
Music
Harris Jayaraj
Year
14 November 2008
Lyrics List
Story
The film begins with elderly Krishnan (Suriya) returning home after a haircut. Once he reaches home he vomits a profuse amounts of blood and is kept to bed rest. After the doctor checks him, he is reported dead after a few moments of grief with his wife Malini (Simran), daughter Shreya, and daughter-in-law Priya (Divya Spandana). This news is informed to his son Surya (Suriya) who is on a military mission traveling in a helicopter. He begins to shed tears and starts thinking about his memorable moments with his father and the story of how his parents loved each other during their college days.

Krishnan is a student in the same college where Malini studies. They fall in love and get married. They soon have a son, Surya. He grows up as a friend to his father. He joins an engineering college near Tiruchi and parts from his family. There he takes part in cultural activities and develops his guitar skills. When he is on a train back home after completion of college, he meets Meghna (Sameera Reddy) who is doing Engineering in National Institute of Technology Tiruchirappalli. He soon proposes to her. She rejects him, saying that they have known each other for a very short period and it's not possible to fall in love without taking time to understand him. Surya then tells her that wherever she goes, he will meet her.

Surya is disturbed constantly by Meghna's thoughts and consequently ends up going to her house. There she tells him that she is going to University of California, Berkeley in a week to pursue higher education. During that period Krishnan, Surya's father, gets his first mild heart attack and is admitted to the hospital. Then on, an inspired Surya obtains projects and finally builds a house for his parents.

After that, he goes to the United States, with the acceptance of his father, and meets Meghna in San Francisco where they have the time of their lives. Meghna is convinced that he is the right person and that he will be accepted by her father. Their happiness does not last long when she goes to Oklahoma City for a project. Surya joins her later traveling by the Greyhound bus. When he reaches there, he witnesses the Oklahoma City bombing and realizes that Meghna is amongst those injured. She dies on her way to the hospital. A heartbroken Surya returns to India. He meets Shankar Menon at the airport who tries to console him with words and offers him encouragement. Surya still can't take the situation.

He once again and starts hanging out with his friends to get over his loss. He meets Priya (Divya Spandana), his sister's friend. However, the thoughts of losing Meghna still haunts him, and he resorts to taking drugs. Surya's parents try to get him to break the habit by locking him up in his room and removing him from all external contact. Once they detect his withdrawal symptoms, they ask him to take a long break to rejuvenate himself. Subsequently, he takes a leisure trip to Kashmir. There he learns that Aditya, the son of Shankar Menon, the person who inspired him in the airport was kidnapped. He visits them in Delhi. On seeing the lethargic attitude of the police, he takes matters into his own hands and goes in search of the kidnappers. After days of roaming streets and gathering information, he locates the kidnapper (Prithviraj) and the place where Aditya is kept. He battles the kidnappers single-handedly, overpowers them and rescues Aditya.

Back home, Surya starts to go out with his sister and her friend Priya. One day Priya proposes to him, but he doesn't respond. Surya decides that the only way to forget the pain in his body is to prepare it for bigger things. He goes on a strict workout training and joins the army. After six years, Priya comes to the Indian Military Academy where he is posted to meet him and proposes again; this time he accepts. They marry and have a son. Suddenly Krishnan is diagnosed with throat cancer and is operated on. After some days Surya is called upon to go on a mission to rescue a journalist which brings the scene back to the present day. After completing the military mission with the help of a masked man (Gautham Menon) who tells them where the culprits were, Surya returns home to see his dead father. Surya, his sister Shriya, Malini and Priya let go his father's ashes in the sea and Malini relates her husband's life to Surya by uttering a verse from a prayer. The film ends on a happy note as the four walk away smiling; conveying the message that "Whatever happens, Life has to go on."