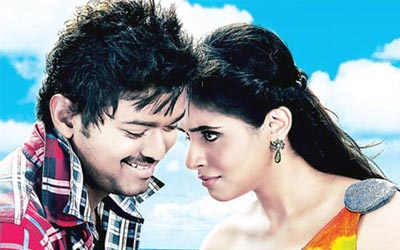 Movie Name
Pokkiri (2007)
Movie Name (in Tamil)
போக்கிரி
Starring
Vijay, Asin, Prakash Raj
Music
Mani Sharma
Year
12 January 2007
Lyrics List
Story
The city of Chennai is rife with nefarious activities of land mafia. There are two rival gangs: one under Ali Bhai (Prakash Raj) who resides in Dubai and controls the operation through his capos Guru (Vincent Asokan), Loggu (Subbaraju) and Mona (Brindha Parekh). The other gang is operated by local goon Narasiman (Anand Raj) who operates in the Port areas. Both threaten builders and land owners into giving them hafta/protection money or real estate property, through means of force, extortion or murder. Mohamed Maideen Khan (Napoleon) arrives as the new Commissioner of Chennai and starts cracking on goons in the city.
The movie begins with Thamizh (Sathyamoorthy) (Vijay), a local goon who will kill anyone, anytime given the money is good, being chased by Loggu and his henchmen. Tamizh has taken a contract from Narasiman to beat up Loggu, which he does successfully . Impressed by his ability to handle a seasoned gangster like Loggu and his henchmen, Guru invites Tamizh to join Ali Bhai's gang. Tamizh declines the offer stating that he does not work for any gang, but is ready to do anything, given enough money. Tamizh hangs around with his friends, which include Saravana (Sriman) and Vaiyapuri.

Meanwhile, Tamizh encounters Shruthi (Asin Thottumkal) when he visits his friend's father's (Nassar) aerobics class. He is bowled over by her beautiful face, though she disregards him as a thug. Shruthi, a college going student, lives with her widowed mother and younger brother. Body Soda (Vadivelu), is a cowardly kung fu master who lives next-door to Shruthi and is the main source of comic relief of the film. He is trying to win her heart, but has had trouble doing so. Sub inspector L. Govindan (Mukesh Tiwari), is a corrupt, perverted officer in the colony where Tamizh and Shruthi live. He goes hand in glove with the land mafia, often helping them out in their activities. He is also on the payroll of Ali Bhai. He is also a lecherous man, whose eye falls on Shruthi and he decides to make her his mistress.

Tamizh's first assignment with Ali Bhai's gang is to kill a member of Narasiman's gang. However, police show up at the spot where Tamizh and the other gangsters are waiting for the kill. Tamizh distracts the cops long enough for the others to finish the task and flee. He also helps Shruthi escape from L. Govindan, in the middle of all this. She is impressed by his kindness and starts developing friendship with him. He also starts having feelings for her, which are reciprocated by Shruthi . He teaches her to whistle. When she expresses her feelings towards him, they are attacked by members of Narasiman's gang, whom Tamizh single handedly finishes off. Shruthi is shocked to learn that Tamizh is a seasoned gangster and has no qualms in killing people.

L.Govindan starts harassing Shruthi and her mother, and wants them to cater to his lecherous demands. On realizing that Shruthi is about to get married, he arranges to have some thugs put up a mock show of molesting Shruthi, so that no decent family will want to take her as their daughter-in-law and with no other option Shruthi and her mother will accept his demands. Tamizh gets wind of this and trashes L.Govindan in incognito, warning him that if he is responsible for this incident then things will turn very ugly for him. Later, Tamizh finds out the thugs who puts up a mock show of molesting Shruti, came to disturb her in the train. Tamil catches up the train and kills them.There Shruti confesses that she cannot forget Tamizh and she loves him a lot. They get together.

Unable to withstand the interference by Narasiman into his gangs operations, Ali Bhai comes to Chennai and kills Narasiman alone. He also meets Tamizh to discuss with him the killing of a minister by blowing up a bomb. Tamizh however, disagrees to Ali Bhai's method as it is his principle not to kill women and children. In the middle of their argument, police raid the club and arrest Ali Bhai. His gang members retaliate by kidnapping the Commissioner's daughter and creating a lewd video, which is then released to the public. This forces the police to release Ali Bhai. After coming out, Ali Bhai starts torturing the Commissioner's daughter, who accidentally reveals that her father has placed a mole in Ali Bhai's gang and his name is Sathyamoorthy. This causes a lot of tensions and after digging up some old records they find that Tamizh's friend's father, Shanmugavel (Nasser) was formerly a circle inspector and his son Sathyamoorthy (Tamizh's friend, Sriman) is now a part of Tamizh's gang.

Assuming him to be the mole, Ali Bhai kills Sathyamoorthy in front of his dad. However, it is then revealed that the person who died is not the son, but the foster son of Shamugavel, who was called Saravannan. It is then revealed that the actual son of the circle inspector, is none other than Tamizh. His father explains that Sathyamoorthy is a gold medalist IPS officer, who has been masquerading as a thug so that he can penetrate the underworld and wipe it out from the inside.There Ali Bhai kills the father hoping Sathyamoorthy will come looking for the father. Sathyamoorthy goes to seek revenge of his fathers death where Shruti tries to stop him. He leaves her in the Commissioners protection and goes to find them.

The movie concludes with Sathyamoorthy avenging his father's death by finishing off Ali Bhai, his henchmen and the police inspector, Govindan.