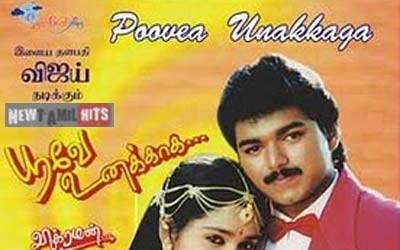 Movie Name
Poove Unakkaga (1996)
Movie Name (in Tamil)
பூவே உனக்காக
Starring
Vijay, Sangita, Anju Aravind
Music
S. A. Rajkumar
Year
15 February 1996
Lyrics List
Story
Nagesh and Nambiar have been best friends since college and so have their children, Jaiganesh and Vasudevan. Jaiganesh's family members are Christians while Malaysia Vasudevan's are Hindu. Jaiganesh's son is Lawrence and Malaysia Vasudevan's daughter is Nandhini Anju Aravind. Robert, Jaiganesh's brother, and Janaki, Malaysia Vasudevan's sister, fall in love with each other. Against their families' wishes, they elope. Ever since then, the two families hate each other. 25 years later, Nandhini and Lawrence fall in love with each other, but are afraid of their families' opposition.

Raja (Vijay)comes to the village and announces that he is the son of Robert and Jananaki. He wants to reconcile the feuding families. With his friend Gopi (Charle), Raja stays in the house of the loud & frightful Velingiri. He gradually endears himself to both families. Later, both his grandmothers suggest marriage. To avoid the situation, Gopi suggests that Raja tell them that he is married. Raja decides that this is the only way, thus lying that he is married to a Hindu-Christian like himself, Nirmala Mary (Nimmi).

Several days later, Nirmala Mary arrives. Raja is confused, as she was just a figment of his imagination. After several encounters, Nirmala Mary comes clean with Raja, telling him that she is the only child of Robert and Janaki. She then confronts Raja, asking him why he wants to unite the two families.

Thus ensues a flashback where Raja explains why he came to the village. While living in the city, Raja lived next to a ladies' hostel, where Nandhini was a resident. As she and her friends were trying to find a good song for a competition, Raja indirectly helps her and falls in love with her. However she treats him as only a good friend. When Raja was about to confess his love for her, Nandhini instead tells Raja about her love for Lawrence. Hearing their plan to marry without their parents' consent due to the Robert-Janaki problem, Raja volunteers to unite the families so that they can marry with the blessings of their families.

Raja and Nirmala carry out this mission and, when he is seen helping out the lovers in their ways of marrying, Anju Aravind's father learns of their love. The news spreads quickly like wildfire and both families now think they have run away and want to kill the members of the other family. Meanwhile, Raja has reconciled the grandparents of the two families. Only the uncles and the lovers are his main concern. At the end, he manages to unite the lovers and their families in a logical manner.

After the marriage, the truth of Raja's appearance is revealed. Later, the families ask him to marry Nirmala (whose actual name is Priyadarshini) to make him a member of their family. However, he refuses, telling them that he loved a girl and does not want to think of anyone else.