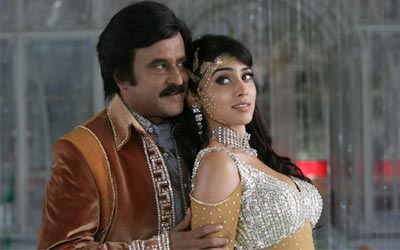 Movie Name
Sivaji (2007)
Movie Name (in Tamil)
சிவாஜி
Starring
Rajinikanth, Shriya Saran, Suman, Vivek, Manivannan, Solomon Pappayya
Music
A. R. Rahman
Year
15 June 2007
Lyrics List
Story
The film begins in medias res, with a masked person being brought to the Central Jail in Chennai, India. When asked by a fellow-inmate for the reason behind his imprisonment, the masked person replies that he is imprisoned for attempting to do good for the people. The masked person is revealed to be Sivaji (Rajinikanth).

The film then winds into a flashback that shows him returning to Chennai from the USA as a software systems architect. He establishes a non-profit trust called the Sivaji Foundation to build a network of hospitals and educational institutions to serve the poor free of cost. However, he faces the obstacles of a corrupt civil service. Sivaji pays the bribes demanded by the government officials for the greater good of the people, but at one stage, the bribes demanded become so high that he has to mortgage his house to pay them. He also faces another obstacle in the form of Adiseshan (Suman), an influential businessman and philanthropist, who sees Sivaji Foundation as competition, because he too runs educational institutions and hospitals which are profit-making centres for him. Using his political strings, he ensures the government repeals the permits they issued on the construction of Sivaji Foundation. Sivaji approaches a lawyer to fight his case, selling his own car to pay the lawyer's fee. However in court, he is forced to admit he bribed numerous officials. This undermines his case and the judge passes a stay order on the construction of Sivaji Foundation.

In parallel, Sivaji falls in love with an orthodox girl named Tamizhselvi (Shriya). Her family is initially scared and angered by the overbearing nature of Sivaji's family, though they eventually accede to Sivaji's request for Tamizhselvi's hand in marriage after a lot of persuasion. However upon asking for his horoscope, an astrologer predicts impeding doom leading up to Sivaji's death if the two are united. When Tamizhselvi refuses the proposal due to her concern for Sivaji, he calms her fears and manages to convince her to marry him.

Following Sivaji's loss in the court case, Adiseshan insults him and gives him a 1 coin, challenging him to try beggary for survival. Ironically, using this very coin, he turns the tables around and forms a plan. He uses the coin to make a phone call to Adiseshan, blackmailing him to give him 100 crore. He then obtains details on people who have black money, and blackmails them to give him half of their illegal wealth. He informs the Income Tax Investigation and Vigilance Department about the details of the illegal money held by the tax evaders (including Adiseshan) and they are arrested by the Income Tax department and brought to court. He then transfers the money to bank accounts (owned by friends and contacts) around the world, who deposit the money as donations to the Sivaji Foundation, making the money usable and legitimate. Sivaji reopens the foundation, and soon begins to realise his dream of providing free, good quality education, infrastructure, services and employment to people in every district of Tamil Nadu. His adversaries, led by Adiseshan, seek to find out how he converted their illegal money to a usable form and for this they use the CBI. They take advantage of Tamizhselvi's innocence by threatening her with danger to Sivaji's life unless she reveals about how Sivaji converted the illegal money to an usable form. Fearing for him, she turns over his laptop with all the information regarding the various money transactions from people who had black money to his friends' bank accounts around the world. With presentable evidence, Sivaji is arrested by the CBI and the scene returns to the beginning of the film with Sivaji in the Central Jail.

In the jail, Adiseshan and the police force Sivaji to open his laptop as it has a voice recognition system. When Sivaji refuses, Adiseshan loses control and mercilessly assaults him, to the point that it seems that Sivaji had died due to the injuries sustained in the assault. To cover this up, Adiseshan and the police organise for thugs to shoot up the police van that will carry Sivaji's dead body, making it look like murder by a third party. Sivaji however was merely faking his death; he was informed of the plans to kill him by a sympathetic police officer prior to the interrogation. Left alone in the room, he electrocutes himself. Sivaji's friend Dr. Chezhian (Raghuvaran) and Tamizhselvi intercept the police van (informed by Sivaji after he got the police officer's warning) and manage to cart away Sivaji's 'dead' body under the cover of a bus before the thugs could open fire. In Sivaji's stead they plant a dummy. While everyone thinks that Sivaji is 'dead', Dr. Chezhian revives him using a defibrillator. Following Sivaji's 'death', Adiseshan and the CBI still try to open Sivaji's laptop by using people who talk like Sivaji; however this fails and all the data in the laptop is erased.

A few days later, while everyone wonders about the future of Sivaji Foundation, the revived Sivaji returns to take control over the foundation in a disguise of a friend, M.G. Ravichandran (N.T. Ranga Rao in Telugu, A. Bachchan in Hindi). Though Adiseshan immediately realises that Ravichandran is none other than Sivaji, he is unable to prove this to the police due to the tangible evidence of Sivaji's 'death'. Ravichandran promises to avenge Sivaji's 'death' and eventually manages to corner Adiseshan in the terrace of his medical college and fights him. After their fight, a blinded Adiseshan is killed in a stampede.
The film ends with an epilogue which shows the foundation's success, and India becoming so economically and industrially successful that it becomes a G10 country.