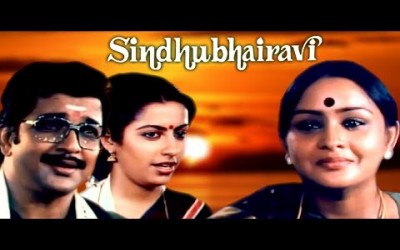 Movie Name
Sinthu Pairavi (1985)
Movie Name (in Tamil)
சிந்து பைரவி
Starring
Sivakumar, Suhasini, Sulakshana, Delhi Ganesh
Music
Ilaiyaraaja
Year
01 January 1985
Lyrics List
Story
JKB (Sivakumar) is a gifted carnatic musician but his wife Bhairavi (Sulakshana), despite her love and loyalty, fails to satisfy or challenge him intellectually. For JKB, this, and her inability to have children, is a problem. Gajapathi (Janagaraj) works for JKB as a Tambura musician, and he is a compulsive liar. The film starts with an introduction of all characters of the film followed by JKB going to a concert where he finds Gurumoorthy (Delhi Ganesh), who works for JKB as a Mridangam musician, drunk.

He instructs Gurumoorthy to leave the premises and performs in the concert without the use of Mridangam which is considered a basic/compulsory instrument to perform a carnatic concert. When Gurumoorthy is asked to permanently leave the band, he promises not to drink again. While Bhairavi's grandfather is going to receive his pension, which he does on the first of every month, Gajapathi lies to him that his pension has been cancelled. The old man starts crying and JKB intervenes to confirm that his pension is not canceled and that he can go and collect it. JKB then scolds Gajapathi for it and tells him the old man could have died on hearing such a lies, as he is very particular about his pension. Following this, when JKB finds out that Gajapathi has lied to him too and others causing problems he asks him to promise to speak the truth.

Sindhu (Suhasini), working as a music teacher in a school, attends one of the concerts of JKB, where he is performing a Tyagaraja keerthanam which is in Telugu Language and she finds some the audience speaking to each other instead of listening to the music. Hence, she asks JKB to translate the song he is singing into Tamil, which everybody in the audience can understand. He then gets angry and challenges her to demonstrate. She successfully demonstrates it and is applauded by the audience. In a few days, Sindhu apologizes to JKB and he finds out that she is an intellectual equal and admires her knowledge of music. However, in a small town in South India, in the 80s, this intellectual attraction is misunderstood based on the cultural limitations of that age. Gajapathi, who has promised not to lie, informs Bhairavi that her husband is going out with Sindhu.

Meanwhile, Sindhu really has fallen for JKB and both of them get intimate with each other. One day, JKB is caught coming out of Sindhu's apartment by Bhairavi. Sindhu is seen as the home wrecker and is forced to quit her association with JKB. He pines for her and leans on alcohol for support, which sadly leads to his downward spiral ending in an embarrassing barter of his musical knowledge for a drink. He even steals money from Bhairavi's grandfather, which leads to his death. Sindhu reenters his life and brings him around, however she has a secret of her own, the secret of her pregnancy. After Sindhu brings back JKB from his alcoholic state, JKB's friends pressurize Sindhu to leave the town and to never come back, which she does the very next day. Both Bhairavi and JKB are distraught as Bhairavi had agreed to marry Sindhu to JKB.

A couple of months later, during one of JKB's concerts, Sindhu is seen coming back and sitting down to listen to his music. However, she refuses to marry JKB saying that she wouldn't deny Bhairavi her rights. Instead she leaves them with a "present"; Sindhu gives up her child to be brought up by Bhairavi in a classic act of defiance to society's rules and leaves town to pursue and share her knowledge of music with the less fortunate.