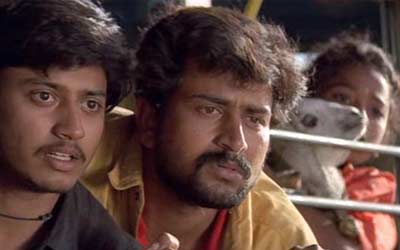 Movie Name
Thiruda Thiruda (1993)
Movie Name (in Tamil)
திருடா திருடா
Starring
Prashanth, Anand, Heera Rajgopal, Anu Agarwal, S. P. Balasubramaniam
Music
A. R. Rahman
Year
13 November 1993
Lyrics List
Story
Freshly printed bank notes to the value of 1,000 crore are stolen in India from a train by the henchmen of a tough gangster T.T. Vikram (Salim Ghouse) living in London. Portly CBI Inspector Laxminarayan (S.P. Balasubrahmanyam) and the other CBI officers are assigned to track down the 1,000 crore worth of stolen currency from the Nasik Government Security Press in 10 days.
The CBI traces the robbery to Ashok Chellaiya, a businessman who had orchestrated the robbery. But before Ashok is arrested, he posts a key card of the container that holds the 1,000 crore notes to his ex, Chandralekha (Anu Agarwal). The CBI officers find a clue “SKF 1138” in Ashok’s office and grill him about it with no success. So they decide to question Chandralekha. Chandralekha, an entertainer by profession, absconds with the card when she learns that Ashok is arrested.

Kadir (Anand) and Azhagu (Prashanth) are two thieves who are notorious in their village in South India for targeting rich landlords. During one robbery attempt, Azhagu stops the landlord’s niece, Rasathi (Heera Rajgopal), from committing suicide. She in turn offers to help them escape her uncle’s henchman on the condition that they take her with them.
On the run from her uncle’s henchmen, they climb on top of a moving train. Chandralekha, traveling by the same train, helps the three get inside but quickly deduces that they are thieves. When CBI stops the train looking for her, she asks for their help, in return for a large sum of money. They help her escape in a horse cart but the CBI continues the pursuit. They fall from a cliff into the water below to escape. After resting, Kadir and Azhagu wake up to realize that Chandralekha has vanished along with their money bag. They leave a sleeping Rasathi alone and go to find Chandralekha.

Vikram returns to India and bails out Ashok, but then kills him because he got caught. Chandralekha tries to call Ashok, but Vikram arranges to meet her to get the key card. The thieves find her, take back their bag and also steal one of her handbags. But the local police officers who see this,think that they stole her money bag, return it to her and arrest the thieves.
While being transported back, they find a handgun on the handbag they stole from Chandralekha. Using the handgun, they escape the police and board a local bus, only to find an enraged Rasathi inside. A group of strong men stop the bus and look for Rasathi. Azhagu points out the hiding Rasathi to the men. The men forcefully drag her, beat her and take her away in a car. Azhagu and Kadir, realizing their mistake, chase and rescue Rasathi.

Rasathi then tells them her story and that the goons are her uncle’s men. She grew up with her uncle and her aunt after the death of her parents. But after an astrologer told her uncle that he or his niece would die soon, he decided to marry Rasathi, thus making her his wife and also to get her wealth. That was the reason why she had tried to commit suicide earlier and is now running away from him.

Chandralekha meets with Vikram’s men but realizes that the thieves robbed her handbag which contained the key card. Meanwhile the thieves throw away the contents of the handbag into a river after finding nothing valuable in it. The thieves reach a carnival and try to hide when they spot police officers. Chandralekha too, along with a couple of Vikram’s goons reach at the carnival. She manages to elude the goons, and promises large sum of money in return for the card to Kadir and Azhagu. The next day, they dive into the river and retrieve the card, only to get captured by Vikram and his goons, while Rasathi hides and watches. The goons beat the thieves to get information on the container from Chandralekha. She tells them that the container will pass through a particular checkpoint at a particular time. During this, Kadir steals the card. Soon a group of people pass near them. Rasathi in the cover of the people, help Kadir, Azhagu and Chandralekha escape. The goons, realizing that the card is missing, give chase but lose them. Vikram goes after the container.

CBI officers, realizing that SKF 1138 is the number of a cargo container, are on pursuit to find it. The cargo container SKF 1138 is being transported in a truck, driven by an alcoholic driver who gives his truck as an assurance to a local bar owner for his previous spending in the bar. Kadir, Azhagu, Rasathi and Chandralekha run into the local police and runs away from them. While on the run, they accidentally fall from the edge of a cliff to on top of the cargo container which is being stolen by the truck driver. The truck driver, thinking that they are sent by the shop owner, tries to get them off the truck by driving erratically. This results in the truck falling into a river. All of them get out unharmed and use local elephants to pull out the truck. Kadir, Azhagu, Rasathi and Chandralekha then use the key card to open the container and are happy to see the money as Kadir and Rasathi profess their love for each other in secrecy.

A little while later, Rasathi’s uncle finds her and takes her away and while Azhagu professes his love for Rasathi to a shocked Kadir. But as soon as they find out about her kidnapping, they go back to her uncle’s house and rescue her. Vikram gets a tip about the truck from a local, find it along with Chandralekha and the key card. Vikram and his goons tie her up and leave with the truck. On their way back, Azhagu and Kadir sees Vikram's men taking the truck. They manage to beat Vikram’s goons, climb on the truck and take it away.Then they hide the truck in the village.

Laxminarayan and the CBI finds and arrests Chandralekha but, unable to find the truck, gather all the people in the village and tells them about the truck and the vast amount of money in it. This causes all the villagers to search for the truck frantically, which is exactly CBI hoped for. Kadir asks Rasathi to forget about him as he doesn’t want to see Azhagu hurt. Azhagu professes his love to Rasathi, who rejects it and leaves both of them.

As Rasathi has always been against stealing, she decides to tell the CBI the location of truck with the money. But on the way, she is kidnapped by Vikram, is tied to the back of a car and is dragged to the village. In the village, Kadir and Azhagu, gives up the truck for the safety of Rasathi. The village people, sensing this is the truck with the money, all clamor to get to it. Vikram’s goons open fire on the people in which Rasathi’s evil uncle is killed. Vikram rides the truck away and take Rasathi as hostage.
Chandralekha tells the CBI that the original plan was to take the container outside the country by a cruise liner, using a cargo train to get to the cruise liner. The CBI then finds the train Vikram is now traveling in but is unable to stop it. They pursue after the train. Kadir and Azhagu, has also followed Vikram to the train. During the battle with Vikram‘s goons and rescuing Rasathi, Azhagu sees Kadir and Rasathi embrace each other and realizes that they are in love. Then they fight and beat Vikram, get the key card and manage to stop the train.

After seeing the container with the money, Kadir and Azhagu playfully ask the other to take care of Rasathi, while they take the money. The CBI catches up the train and secures the money.