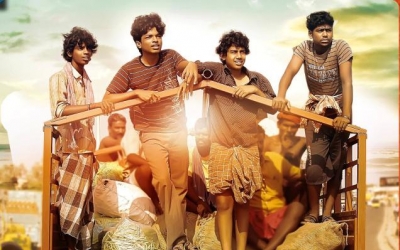 Movie Name
Goli Soda (2014)
Movie Name (in Tamil)
கோலி சோடா
Starring
Kishore, Sree Raam, Pandi, Murugesh, Chandini
Music
S. N. Arunagiri
Year
24 January 2014
Lyrics List
Story
Set against the backdrop of most happening the Koyambedu market, the film revolves around the lives of four young boys played by Kishore, Sree Raam, Pandi and Murugesh. They work as coolies, and earn their bread by working as lifters. They lift and transport vegetable stocks to various shops. One such shop is owned by Aachi, who treats the boys like her sons. The boys are carefree and do not worry about their future, and have fun by teasing and looking at schoolgirls who pass by. They befriend a girl named ATM, who assists them in finding a new friend, who turns out to be Aachi's daughter. They all become friends and hang out together. One day Aachi tells the boys that, they do not have an identity and how long will they live like this? She advices them to do something that will give them an identity and let them earn some respect. They decide to start a mess in the market, where so many people will have access. Aachi helps them to get an old godown from Naidu, a rich Dada, who controls the market. Naidu lets them have the place for free for now, and says will collect the rent later. The boys start the mess and it becomes an instant hit, earning them money and respect. The boys feel that they have now got an identity as the owners of Aachi mess.
Things take a turn, when Mayil, the cousin of Naidu, starts using the mess for his own recreational purpose during the night. The boys allow him first due to their respect for Naidu, but later on Mayil uses the mess for wrong purposes. One night Mayil rapes a woman in the mess, and one of the boys is upset with this, and he orders Mayil to get out of the mess immediately. Infuriated, Mayil beats the boy, and sends him back. The other boys come to know about this, and the next day, they come to the mess and find it still locked. Mayil is still in the mess with hangover and has made a complete mess of the place. The boys get angry and ask him to go out. But as Mayil refuses and attacks them, the boys retaliate and Mayil is pushed down. Mayil starts to attack the boys, and the boys overpower Mayil, and beat him. Angry and humiliated, Mayil leaves the place. Naidu comes to know about this and is extremely angry. Aachi goes to meet Naidu to apologise for the boys, but Naidu doesn't accept and keeps her hostage, till the boys get punished back. Naidu sends his group of men along with Mayil to beat the boys inside the mess, in front of everyone in the market, just like the boys did to him. The boys are forced and they are targeted and mauled by Naidu's men. They are beaten up. At one stage, the boys start to retaliate and somehow get the upper hand. They then attack the men using weapons found in the market and drive them away. Naidu gets further angry. The boys take Mayil as hostage and tells Naidu that if they release Aachi, they will release Mayil. All these incidents make Naidu angry on the boys and vows to take revenge on them. So he plans and attacks the boys once again, makes them unconscious and separates them by sending them to different parts of the country.
The boys reunite after some struggle, and decide to exact revenge on Naidu, for making them lose their identity. They come back to the market and start their restaurant again. Naidu is pretty surprised about this and goes to confront the boys, but they are saved by a cop. The boys decide to avenge their feelings by making Naidu lose the fear people have on him, and oppose him in the market elections. Naidu fears losing the election and he decides to kill the boys and sends all his men to search for them. The boys hide and since Naidu has sent all his men away, they come to know that Naidu must be alone and they take on him. They see Naidu sleeping and they cut of his hair and paste a coin his head, symbolising that he is dead. The next morning, Naidu sees this and is angered to the core. He directly goes himself to the mess and locks it from inside to kill the boys. The boys outpower him and tie him to a post and strip him naked. They threaten to open the door thus making his respect turn into shame. Naidu begs them not to do so, and pleads them to kill him instead of showing him nude to the outside world. The boys then tell Naidu that the identity of a man is more important and he has finally learnt that. Naidu becomes a good man, and the boys are forgiven by Naidu and vice versa. The boys continue to run the mess successfully.The movie emphasises two important things. First, one's identity is important and worth fighting for. Second, forgiving and giving a chance to repent can change lives for good.