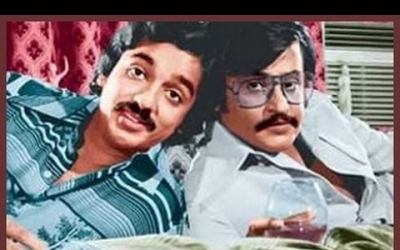 Movie Name
Ilamai Oonjal Aadukirathu (1978)
Movie Name (in Tamil)
இளமை ஊஞ்சல் ஆடுகிறது
Starring
Kamal Hassan, Sripriya, Rajinikanth
Music
Ilaiyaraaja
Year
09 June 1978
Lyrics List
Story
Prabhu (Kamal Haasan) is brought up by Murali's (Rajinikanth) mother and is the General Manager for Murali's marketing agency at Chennai. Murali treats Prabhu not just as a friend, but as a brother and depends on him for all business decisions. Prabhu is in love with Padma (Sripriya), a college student. Padma's relative Jayanthi (Jayachitra) is a young widow who works at Murali's office. Murali, an alcoholic, with a roving eye is not aware of Prabhu's love for Padma. Padma is the only girl who rejects Murali's advances. Though Jayanthi knows about the love affair between Prabhu and Padma, Prabhu's presence stimulates her sexually. Once she accompanies Prabhu and Padma for a film screening and unable to control her sexual feelings, comes out. Murali offers her a lift in his car; both get excited in the privacy of the car, but suddenly feel guilty about the incident.

A disturbed Jayanthi avails leave and goes to her village and Padma joins her, as Prabhu goes on an official tour. Prabhu, planning to surprise Padma, proceeds to Jayanthi's village to meet Padma. When Prabhu lands at Jayanthi's home, she is alone as Padma has gone to attend a wedding in a nearby village. Jayanthi convinces Prabhu to stay back overnight, so that he can meet Padma the next day. Jayanthi arouses Prabhu in the night and they make love. Prabhu, feeling guilty about the whole event, writes a letter of apology to Jayanthi and leaves. Devastated to read the note when she returns to Jayanthi's house, Padma returns to Chennai, where she starts distancing herself from Prabhu without revealing why.

Murali continues to pursue Padma. When she falls down, he saves her and gets her admitted in a hospital, impressing her father. Murali happily informs Prabhu about his feelings for Padma; being a good friend and grateful for the help given by Murali's family, Prabhu remains silent. He accompanies Murali's mother to formally propose Murali's marriage with Padma. Padma's father accepts the proposal, and Padma remains silent. When Prabhu confronts her, she reveals that she had read his letter to Jayanthi, who is carrying his child. Shocked with the news, Prabhu leaves Chennai without intimating Murali and his mother and they feel betrayed. Prabhu searches for Jayanthi and finally traces her in Bangalore.

He makes arrangements to marry her, but she meets with an accident. Just before she dies, he ties a thaali around her neck and gives her the dignity of a wife. He goes to Ooty and works in an estate. Meanwhile, Murali and Padma's wedding is postponed, as Murali falls sick and is advised rest by his doctor. He and Padma come to the same estate on holiday, not knowing that Prabhu is working there. Prabhu meets them and apologises to Murali, who is in no mood to forgive him. But Padma, on learning that Prabhu married Jayanthi before she died, forgives him and tries to come close to him again. Seeing them together, Murali gets angry and takes Prabhu to a cliff; when he is about to shoot Prabhu, Padma reveals that they were originally in love and how they broke off. Murali presents Padma as a gift to Prabhu and leaves to Chennai. Prabhu and Padma finally unite.