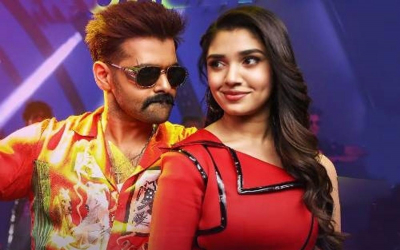 Movie Name
The Warriorr (2022)
Movie Name (in Tamil)
த வரீயர்
Starring
Ram Pothineni, Aadhi Pinisetty, Krithi Shetty, Akshara Gowda
Music
Devi Sri Prasad
Year
14 July 2022
Lyrics List
Story
Satya is an MBBS graduate, who relocates to a government hospital in Kurnool/Madurai with his mother. He meets RJ Mahalakshmi, who is popularly known a "Whistle" Mahalakshmi and soon devolpes feelings for her. He also learns about Guru, a ruthless gangster, who rules the city with an iron fist. Satya lodges a complaint against Guru, whose company has been manufacturing poisonious saline and is involved in the medical mafia. This resulted in the death of three children, but the police does not pay heed as they are afraid of Guru's atrocities.

Guru learns of this and brurally thrashes Satya in front of the Konda Reddy fort and hangs him. However, he is saved by his hospital dean, Robert, in the nick of time. He tells Satya to never return to the city. Satya leaves the city, along with his mother. Years later, Satya returns back to Kurnool/Madurai, this time, as the city's DSP. He wages a war between Guru and his gangsters. He also meets Maha after 2 years where he expresses that he had been thinking about her most of the time and especially when he hears a cooker or whistle sound.

Enraged, Guru reveals to Satya that he killed Robert, when the latter helped Satya escape from Kurnool/Madurai. The next day, Guru contests in the elections, but Satya arrests him on charges of killing Robert, with the help of a pendrive, hidden by Robert, which contained information and evidence regarding Guru's illegal activities. As a result, he is sent to the prison. Guru's wife Swarna plots to kill Satya by stringing, but instead Maha gets hurt by getting a major cut on her throat as she was following Satya. Satya admits her to the hospital, where he learns that she might not be able to speak again. After being encouraged by his mother, Satya calls Guru back to the Konda Reddy fort, for a final showdown. After a close hand-to-hand combat, Satya kills Guru and hangs him, in the same manner, Guru hanged him before. After Guru's death, Satya continues as DSP in the city and is shown giving treatment to a person, who is suffering from a bullet shot.