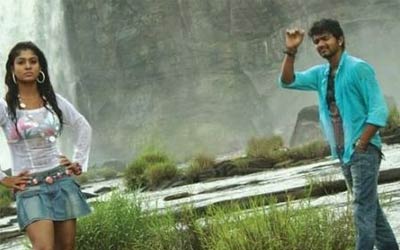 Movie Name
Villu (2009)
Movie Name (in Tamil)
வில்லு
Starring
Vijay, Nayanthara, Prakash Raj
Music
Devi Sri Prasad
Year
12 January 2009
Lyrics List
Story
Inspector Joseph (Manoj K. Jayan) is called in for a secret meeting by a police official. He learns that their long-awaited target Raaka (Adithya) will be arriving secretly in a cargo shipment by sea and that he should be caught at the site. Joseph informs Pugazh (Vijay) through a secret instant message that Raaka will be arriving at the harbour and tells him about their special operation on catching the culprit. Joseph and his team disguise themselves as harbour workers at the harbour and await for Raaka. Then Pugazh carries on with the special operation and succeeds in killing the culprit. Pugazh phones and informs Joseph that their "operation was a success. " Later, Pugazh leaves to a Tehsildar's house in a village for a wedding. He meets Janavi (Nayantara), and tries to woo her. Later on after persistent wooing Janavi falls for Pugazh.

On the occasion, Pugazh sends an instant message back to Inspector Joseph, saying that his next mission was complete, which was making Janavi fall in love with him. Joseph tells Pugazh it is now time to target Raaka's superior commander, J. D. (Prakash Raj). Janavi informs her father J. D., a rich businessman in Munich, Germany, of her love with Pugazh. J. D. tells Janavi to bring Pugazh to Munich. Pugazh meets J. D. in Munich and is told that he is not worthy enough to marry his daughter. Pugazh tells J. D. that it was he who killed Raaka. Pugazh is told by Joseph to go to a hotel in Munich. After a conflict in the hotel with the hotel's pimp (Sriman), he is targeted by the pimp and his boss Shaan (Devaraj), who is J. D. 's business partner in crime.

They follow Pugazh to the airport where Pugazh goes to pick up his mother (Geetha), who lost her son during his childhood. Shaan then decides not to shoot Pugazh, after seeing that Pugazh's mother is none other than his wife, who left him because of him being a corrupt army cadet and receiving money for helping the enemy terrorists of India. Shaan holds a party for finding his long-lost son, Pugazh. J. D. also comes to know that Pugazh is his partner's own son. Shaan takes Pugazh to his secret locker room and hands him over his secret Blu-ray disc containing all the evidence of J. D. and his plans. Shaan tells Pugazh that he should retrieve the discs that J. D. has hidden in order to take over all his business, once he marries Janavi. Pugazh then takes his father on an airplane and tells him something that shocks him.They then fight and the plane crashes into a cliff, killing Shaan, while Pugazh escapes from the plane with the help of a parachute.

Pugazh meets J. D. and tells him that he killed Shaan. Pugazh also tells him that he was not really Shaan's son and that he tricked him into believing that he was Shaan's real son who was lost long ago. Pugazh tells J. D. that he will bring Shaan's henchmen over, pretending to kill J. D. and eventually kill them instead. A happy J. D. tells Pugazh to proceed. Just then, J. D. records Pugazh's conversation with him and sends it to Shaan's henchmen, telling them to kill Pugazh. When Pugazh brings them to J. D. 's place, Pugazh is targeted by them and gunpoint and is threatened to tell them who he really is and why he killed Shaan. Then a few bombs set by Pugazh blasts and all of Shaan's henchmen get killed and Pugazh escapes. Pugazh sends the Blu-ray disc he received from Shaan to Inspector Joseph in India, who found Raaka alive(Pugazh simply poked Raaka with a knife and thought that Raaka died, but it wasn't so). Raaka injures Joseph and escapes from Joseph's custody. Raaka then informs J. D. that he is alive. J. D. sends his men to bring Pugazh over. While Janavi, who is not aware of the conflict going on between Pugazh and J. D., listens to the two aconfronting each other, J. D. asks for the disc back from Pugazh. Janavi finally finds out about Pugazh and tells Shaan's wife about Pugazh's identity. Shaan's wife is already aware of Pugazh's true identity and knows that he is not her real son. She also tells Janavi the reason why he killed Shaan and why he is after J. D. and about Pugazh's real father, Major Saravanan (Vijay).

Major Saravanan was an Indian Army officer, who was a fellow friend of Inspector Joseph. He was told to undertake a peacekeeping mission task force. Meanwhile, J. D. and Shaan, who were the corrupt army cadets seeking money from the terrorists and willing to help them, plan their means of killing Saravanan. During the mission, J. D. and his corrupt army men murder Saravanan while on duty. J. D. acts as an eyewitness account, telling the army commanders that they killed Saravanan, whom they claim was corrupt and tried to attack them while helping the terrorists, only for the safety of the others soldiers and themselves. Abiding the final court hearing regarding the incident, the army takes away Saravanan's badges, uniform and titles at his funeral. Pugazh's mother (Ranjitha) tries to stop them, claiming that her husband was not a betrayer to the country,but in vain. When Saravanan's body was to be cremated, the villagers throw out the body into a ditch, claiming that it was a sin to burn his body on their soil. Pugazh and his mother cry as they could not find Saravanan's body in the blowing sand. Pugazh's mother sits in a temple that night with Pugazh. She sends Pugazh off with Shaan's wife, fearing the village might accuse Pugazh to be a "child of a national criminal. " Pugazh and his mother did not see each other since then.

In the present, J. D. takes Pugazh to India to retrieve the Blu-ray disc back. They meet Joseph who is at gunpoint by Raaka. When J. D. 's henchmen get out of a car to get the disc, Pugazh flees with J. D. to the temple where his mother is at. After an emotional moment with his aged mother, J. D. 's men arrive at the place. They kill Inspector Joseph and hurt Pugazh. Pugazh becomes weak, unable to fight, and J. D. buries him alive in the sand. Pugazh's mother cries out loud to God to save his son. Just then, heavy winds blow, slowly blowing the sand away. Pugazh then jumps out of the sand with rage. J. D. then fights an intense battle with Pugazh. Now, J. D. is weakened by Pugazh and the villagers began to gather around them. Pugazh tells J. D. to tell the villagers the truth. J. D. tells the villagers that Major Saravanan was actually an honest man and it was himself who helped the terrorists. After his confession, Pugazh kills J. D. at once. The film's credits role as the army force gives back Saravanan's army badge and uniform to Pugazh's mother.