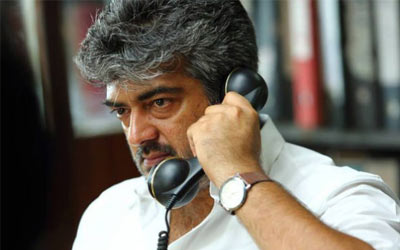 Movie Name
Veeram (2014)
Movie Name (in Tamil)
வீரம்
Starring
Ajith Kumar, Tamannaah
Music
Devi Sri Prasad
Year
10 January 2014
Lyrics List
Story
Vinaayagam (Ajith Kumar) is a brave person living in a village called Oddaanchatram, who lives with his four brothers Murughan (Bala), Shanmugham (Vidharth), Kumaaran (Suhail) and Shenthil (Munish). The elder brother loves the younger ones to the core, and sacrifices his happiness for their good. They are often caught in fights and they are proud of it. Advocate Bail Perumaal (Santhanam), who bails them out whenever legal issues arise because of their brawls. Vinaayagam hates the idea of marriage as he feels that his wife might create disharmony among brothers. Though the four younger brothers say that they don't want to either fall in love or get married, when Vinayagam is not around, they all have their secret lovers. Now, in order to get the green light for their love stories, they learn through his brother's childhood friend Collector Subbu (Ramesh Kanna) that Vinayakam, in his school days, was in love with a girl named Koppuram Devi (fondly called Kopu) and his brothers hatch a plan to find her and reintroduce her to Vinayakam, so he can fall for her all over again. But she's married now and has kids. So the brothers conspire to do the most logical thing, which is to find another woman named Koppuram Devi (fondly called Kopu), because, Vinayakam was not in love with that girl so much as her name, and when he meets another (completely random) girl with that name, he is sure to lose his heart to her, just because she bears that name. Though initially reluctant later Vinayakam himself falls in love with her. He clashes with a goon called Vanangamudi (Pradeep Rawat) to take care of market in the village. Vanangamudi tries to kill Vinayagam's brothers while Vinayagam kidnaps Vanangamudi's son (Amit Kumar Tiwari) after clashing, Vinayagam orders Vanangamudi to leave this village.

While travelling in train to Koppu's village, Koppu narrates her family background to Vinayak. Koppu's father Nallasivam (Nassar) is a respected man in the village who hates violence, while his son (Pawan) is exact opposite who kills people but when he is killed, Nallasivam refuse to bury his body and decided to make his village with peace and harmony. Few goons enter into train but Vinayagam bashes all the rowdies, Koppu is shocked to see Vinayagam whom she thought as a non-violent person. Vinayagam and his brothers arrive at Koppu's village with clean shaven look, he says that he has changed and he would never harbor violence, he and his brothers are welcomed and respected by her family. Vinayagam is touched and impressed by their love, affection and hospitality. Vinayagam comes to know that a goon named Aadalarasu (Atul Kulkarni) wants to kill Nallasivam and his family, reason is revealed through flashback that Aadalarasu's father Aavudaiyapan (Avinash) is responsible for blast of matchstick factory. Nallasivam complains against Aavudaiyappan. Aavudaiyappan who is arrested, commits suicide by getting hit by a lorry.