Movie Name
Settai (2013)
Movie Name (in Tamil)
சேட்டை
Starring
Arya, Anjali, Santhanam, Premji Amaren, Hansika Motwani
Music
S. Thaman
Year
25 February 2013
Lyrics List
Story
The story revolves around three roommates, journalist J K Boss(Arya), photographer Nagaraj and Cheenu leading an unkempt and debt-ridden life in a shoddy apartment. J K's ditsy fiancée, Madhumita, is an air hostess who agrees to deliver a package for Vladimir Dragunsky (Kim Bodnia) to Nassar, without realizing its contents or that Nassar is a gangster. Madhumita asks J K to deliver the package. J K, in turn, asks Nagaraj to do so. But Nagaraj is unable to do so as he is experiencing 'Chennai Belly'.

Nagaraj hands Madhumita's package to Cheenu for delivery to Nassar, along with a package containing his stool sample for delivery to Nagaraj's doctor. Cheenu mixes up the two packages which makes Nassar furious and he starts the investigation by interrogating Vladimir. Meanwhile, Nagaraj photographs his landlord with a prostitute. He sends an envelope with the photographs to his landlord to blackmail him. Jayaganthan is with Madhumita, performing cunnilingus when his colleague Shakthi (Anjali) calls him on the pretext of work. When he reaches the place he realizes that it is just a party and Shakthi called him just to have fun.

Shakthi's ex-husband Rajeev sees them together and gives Jayaganthan a black-eye in a fit of jealousy. Jayaganthan retaliates and knocks Rajeev out. As Jayaganthan and Shakthi leave they are chased by a furious Rajeev and his friends who shoot at them. The duo barely manages to escape. Vladimir informs Somayajulu that the mix-up must have been caused by Madhumita as she didn't know what she was carrying in the package. Somayajulu calls Madhumita , informs her about the mix-up and asks her to give him the address of the person who had delivered the package. When Jayaganthan arrives into his apartment, he walks into Somayajulu who has cheenu standing on a stool with a noose around his neck. On hard interrogation, Somayajulu discovers the mix-up and realizes that the package must be with Nagaraj's doctor. Nagaraj gets the package from his doctor's office, wherein Somayajulu finds his thirty diamonds hidden inside. Upon recovering his booty, he orders his henchmen to kill the three roommates. One of them is about to shoot Jayaganthan, when another kicks the stool on which cheenu was standing to hang him. Luckily for the roommates, the ceiling of the apartment caves in, since it can't take Arup's weight. The cave-in injures and knocks-out Somayajulu and his men.

Jayaganthan,cheenu and Nagaraj escape along with the diamonds and spend the night at Shakthi's place. The next day they sell the diamonds to a local jewellery store. As the roommates prepare to get out of town with the money, they get a call from Somayajulu who has kidnapped Madhumita. He threatens to kill her if they don't return the diamonds. The trio, try to buy back the diamonds from the jewellery store, who demands double the sale amount. Without the money, Jayaganthan comes up with a plan.

Najaraj, Cheenu, Jayaganthan and Shakthi disguise themselves in burqa and go back to the jewellery store. They con the owner, gag him and forcefully take back their diamonds and return his money. They make their get-away in Jayaganthan's car with the police on their tail and make their way to the hotel where Somayajulu is holding Madhumita. As they are about to make the exchange with Somayajulu, the police arrive at the hotel room. There is a shoot-out between the police and Nassar's gang.

Najaraj, Cheenu, Jayaganthan and Madhumitha, who had hit the floor during gunfight,are left as the only survivors. Shakthi is upset to learn about Jayaganthan's engagement and walks away from him. Jayaganthan breaks off his engagement to Madhuitha. Later, it is revealed that Nagaraj did not return the cash to the jewellery store owner, and had kept the money for himself. The film ends when Shakthi comes to the roommates' apartment to return Jayaganthan's car's hubcap lost while escaping from Rajeev. Jayaganthan jumps into her car through the open window and kisses her passionately. 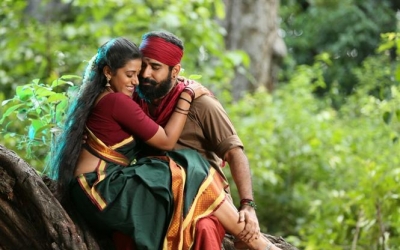