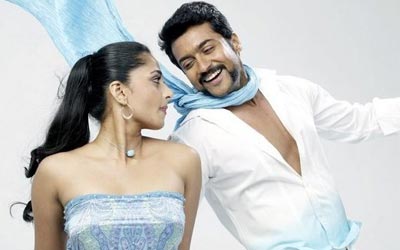 Movie Name
Singam (2010)
Movie Name (in Tamil)
சிங்கம்
Starring
Suriya, Anushka Shetty, Prakash Raj, Nassar
Music
Devi Sri Prasad
Year
28 May 2010
Lyrics List
Story
The film begins in Nallur, a small village in Thoothukudi district in southern Tamil Nadu. Duraisingam (Suriya), is the honest police inspector of Nallur, assisted by his bumbling colleague Erimalai (Vivek). He belongs to nallur with his father having a respectable status in the village. His family business is provision sstores and suriya wants 2 join it, but he joined police due to his father's wishesHe resolves most of the problems in his village with non-violence and mutual counselling. He uses force only when the situation demands it, thereby gaining much reputation and love from the villagers. Mahalingam (Nassar) is an industrialist in Chennai and a friend of Singam’s father (Radha Ravi). He comes to the village with his beautiful daughter Kavya (Anushka Shetty). Eventually Singam and Kavya fall in love with each other.

Everything seems to be smooth-running until Chennai-based Mayil Vaaganam (Prakash Raj), a big-time extortionist with shady mafia dealings who blackmails people by complaining to the Income Tax Department, is required to travel to Nallur to sign a conditional bail. He instead, sends one of his allies to do the formalities, much to the anger and rage of Singam who demands Mayil sign the bail in person. Humiliated, Mayil reaches Nallur but is unable to take any revenge on Singam fearing the immense love and devotion of the entire village towards Singam. Using his political contacts, he gets Singam transferred to Chennai to teach him a lesson.

Singam, unaware of Mayil’s hand behind his transfer, joins Thiruvanmiyur police station. His co-worker, Sub-Inspector Ravi (Bose Venkat), hates Mayil for his crimes but is unable to take any action because of Mayil’s political powers. The assistant commissioner (Nizhalgal Ravi), Singam's senior, is on Mayil's payroll and takes care in concealing and eliminating the evidence of Mayil’s crimes from the eyes of the law. The police commissioner (Ajay Rathnam) also does not help Singam as there is no evidences against Mayil and the assistant commissioner and in turn, warns him to stay away from Mayil's case. Unable to take on Mayil in his stronghold, Singam wants to return to his village but is stopped by Kavya who encourages him to fight against the evil and not run like a coward.

Being mentally tortured by Mayil, Singam arrests Mayil’s henchman (Adithya) in a fake case of illegally smuggling alcohol. He thwarts off the assistant commissioner in full view of the public when the assistant commissioner, bounded by his duties to Mayil, tries to protect the henchman. Meanwhile Mayil kidnaps Kavya’s younger sister for ransom. Rescuing her, with unexpected help from the Home Minister (Vijayakumar) Singam successfully traces the origins of the kidnapping racket to Mayil. Singam also gets promoted to Assistant Commissioner of the specially-formed Anti-kidnapping Task Force. Mahalingam, who was hostile to Singam following an altercation with Singam's father back at Nallur, softens up and agrees to give him Kavya's hand in marriage.

The police officers, including the police commissioner, and the assistant commissioner, now on Singam's side, decide to help Singam fight Mayil. They manage to kill Mayil's henchman in an encounter at an hospital and begin to target everyone and everything related to Mayil. In retribution, Mayil starts targeting everyone close to Singam, including Kavya, whom he shoots but is saved by Singam, and Ravi, who is hacked to death by Mayil's henchmen. To escape the arrest warrant issued out to him, Mayil kidnaps the Karnataka Home Minister's daughter. He falsely tells Singam that he is going to Pondicherry with her when actually he is going to Nellore in Andhra Pradesh to put the police off the track. However Singam manages to pursue them till Gudur near Nellore, where he rescues the home minister's daughter and kills Mayil in an encounter.

The film ends with Singam and Kavya heading back to Nallur, when Singam is stopped briefly by the Home Minister and assigned an undercover mission, to which he gladly agrees.