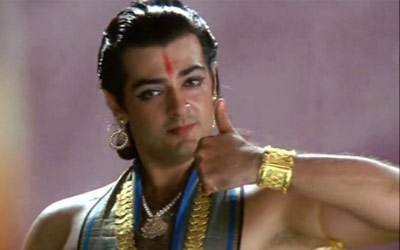 At a large feast that evening, Divya and the other girls woo Vishnu and his friends before leading them to the bedrooms. Vishnu's friends are injected with a substance called "Monkey Blood", which makes them itch all over and they leave, screaming and scratching. Vishnu himself refuses to sleep with Divya, saying he has committed lots of small mistakes and doesn't want to make a big one by sleeping with her. He asks her to leave her profession and Divya lies to him, saying she can't, as she has to support a family that is crippled with various diseases. Vishnu, moved, leaves. Vishnu offers Divya money so she can start a new life, but Divya refuses once again, saying she doesn't need a new life, she has to restore her honour - so Vishnu agrees to marry her in the village temple. Divya doesn't believe him, but Vishnu says he will be there to marry her the next day.

Divya doesn't come, however, and Vishnu and his friends see her leaving on a bus bearing the name of the girls' college. Vishnu and his friends now know they have been tricked and the girls weren't really prostitutes. When Vishnu returns home, Shivshankar discovers that his son has fallen in love. With his influence, Vishnu and Divya get engaged. Shortly thereafter, Shivashankar is disappointed with Vishnu's behaviour and his attitude.Vishnu went to Divya's house after a party.Her father and brothers resisted him to talk to her in drunken state. This eventually led to a fight.Vishnu went to Divya's cousin's house to meet Divya and apologise for his behaviour the previous night but suddenly attempted to rape Divya's cousin.After several days of this misbehavior, Vishnu is sent to a therapist.

Here enters Jeeva (the third role played by Ajith Kumar), Vishnu's twin. Assuming Vishnu's identity, he had taken the money from the bank, gone to Divya's place after party and attempted to rape Divya's cousin. Jeeva tries to stab Shivshakar and but stabs Shivshankar's assistant instead. It is revealed that Jeeva hates Shivshankar for leaving Jeeva's mother (Kanika). At the same time, Divya manages to sneak into Vishnu's hospital and tells him that she thinks he's innocent. She leaves and shortly afterwards, Jeeva appears, smuggles Vishnu out of the hospital, dumps him somewhere, takes over his identity and goes to kill Shivshankar. The father notices that it's not his son and gets out of his wheelchair to defend himself. Vishnu arrives at the scene, surprised that his father is able to walk and demands an explanation.

Shivshankar tells him that he once was a dancer who, due to dancing, gained a reputation of being effeminate. His mother had arranged for Shivshankar to marry her friend's daughter, (Kanika). He agreed but the girl rejected Shivshankar for being too feminine, therefore insulting him in front of the wedding crowd. Unable to bear the embarrassment, Shivshankar's mother died on the spot. Shivshankar, enraged, raped the girl, a deed that resulted in a pregnancy. The doctor refused to give her an abortion and so Vishnu was born, because Vishnu's grandmother wanted the child. Shivshankar takes his child from the mother saying that this child would be the only hope and reason of his life. Shivshankar confesses to Vishnu that he is ignorant of Jeeva's existence and the reason for his resemblance to them.

Jeeva escapes and now threatens the wedding between Vishnu and Divya. Shivshankar tries to stop him. Finally, Jeeva's grandmother comes out of hospital, explains that Jeeva is also Shivshankar's son and Vishnu's twin and that Kanika went mad when Jeeva was about to get hit by a lorry. Jeeva realises what he has done. He wants Shivshankar to shoot him, but police misunderstand and think that Jeeva is pointing a gun at Shivshankar and the police try to shoot Jeeva. Shivshankar intervenes and is shot instead. Jeeva is taken into custody. Jeeva's mother does not accept food from anyone, until Vishnu comes dressed up as Jeeva and feeds her. It ends with stating that Shivshankar is their godfather.