Gautam (Prabhu Ganesan) is a police academy trainee and during a routine boxing match, he goes overboard and beats up his opponent even after the referee has stopped the fight. The police commissioner reprimands Gautam and asks him not to take out his anger towards his father, Vishwanath, on someone else.

Ashok returns home to his mother, sister (Tara) and his inebriated father. His mother asks him to take his father to his 1st wife’s, (Sumitra) home. Ashok initially protests but relents to take him home. After the ride, Gautam comes to the door and helps his father into home. There is a brief moment of animosity between Gautam and Ashok and it is clear that both the half-brothers hate each other.

During a party at the Police Commissioner’s house, Gautam meets the Commissioner’s daughter, Anjali (Amala) when he covers for her smoking. One day, when Ashok is just hanging out with his friends, a girl, (Nirosha), looks at him, shouts "I love you" and drives away. A stunned Ashok tries to follow her but loses her in the traffic. Vishwanath is appointed the head of an inquiry commission to probe a chemical factory, owned by Chidambaram, believed to sell chemicals to terrorists.

Gautam graduates from the academy & is appointed as an Assistant Commissioner and Anjali and him fall in love with each other. Ashok runs into Nirosha again but this time he memorizes her car number. He traces her address by bribing a transport officer, goes to her home and says "I love you" to a surprised Nirosha.

Ashok and his friends run into Gautam and Anjali which prompts one of Ashok's friends to tease Gautam. Gautam soon stops Ashok's friend while he is riding his motorbike and asks for his license. When he shows it, Gautam throws it away and arrests him for driving without a license but instructs his constables to release him after a couple of hours. A peeved Ashok goes to Gautam's place and stones it causing an accidental injury to Gautam's mother.

The next day, Gautam tries to arrest Ashok but Ashok teases him that he doesn't have a warrant and cannot be arrested. Gautam accuses Ashok's parentage which causes Ashok to lose his cool and assault Gautam. Gautam then arrests Ashok on charges of assaulting an officer of the law. Since Vishwanath is out of town, Sumitra helps Jayachitra bailout Ashok.

Chidambaram visits Vishwanath at his office and later at both his homes and tries to bribe him but each time Vishwanath rebuffs him. An irked Chidambaram warns to put a hit on Vishwanath if he still continues with his investigation.

On the day when Ashok's sister is to be asked for her hand in marriage, Vishwanath fails to turn up which causes the groom's family to question the marriage between Jayachithra and Vishwanath. An angry Ashok goes to Vishwanath's home and creates a ruckus only to realize that his grandmother, Vishwanath's mother (S. N. Lakshmi) has died. Gautam, angered by the scene caused by Ashok, throws him out.

Nirosha visits Ashok at his home uninvited and falsely tells him that she is pregnant with his child in front of his mother to get him in trouble. Ashok finds her having lunch with her father and enquires about her pregnancy to scare her. But he stops once he learns that Nirosha too comes from a broken home.

One day, when Ashok's sister is travelling by train she runs into Gautam and Anjali, so Gautam gets into the next train car. After he leaves, Chidambaram's men harass and threaten the sister. She runs away and tells Gautam and Gautam saves her. While dropping her off at her home, Ashok throws Gautam out of his house.

Another altercation occurs at a wedding in which both exchange words. The next day, Ashok finds Gautam and both get into a huge brawl, which Vishwanath witnesses. Vishwanath berates both of them and gives up hope on both of them ever getting along with each other. While Vishwanath is leaving his office, he gets run over by a truck driven by one of Chidambaram's thugs.

Vishwanath survives with severe injuries and goes into a coma. Mutual fear between the families brings them closer as both Sumitra and Jayachitra wait by his bedside. Ashok threatens Chidambaram with dire consequences if his father dies. Gautam tracks down the truck driver and arrests him. Unhappy that Vishwanath survived, Chidambaram arranges for his murder in the hospital. He uses his connections to remove the police security from the hospital and gets the truck driver out on bail. Vishwanath comes out of the coma and asks both his sons to help keep him alive till he presents his evidence against Chidambaram to the commission the next day. When Chidambaram's thugs attack the hospital, the brothers work together to stop the assassination attempt by switching the ambulance in which Vishwanath was in.

The film has a parallel comedy track which focuses on a rich man (V. K. Ramaswamy) and his chauffeur’s (Janakaraj) quest to ditch their wives and to sleep with a pretty prostitute. 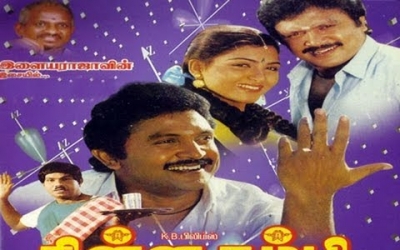