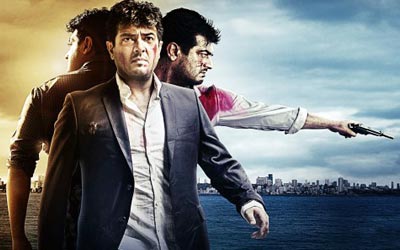 Movie Name
Billa 2 (2012)
Movie Name (in Tamil)
பில்லா 2
Starring
Ajith Kumar, Parvathy Omanakuttan, Bruna Abdullah
Music
Yuvan Shankar Raja
Year
13 July 2012
Lyrics List
Story
David Billa (Ajith Kumar), a Sri Lankan refugee arrives at the city of Rameswaram in a boat. He is interrogated by a corrupt police officer before he is allowed to enter the refuge camp. At the shelter he befriends Ranjith (Yog Japee) and others. After a series of events the corrupt police officer Raghubir Sinha (Krishna Kumar) conspires against them and harrases them. Soon, Billa and Ranjith are hired to transport fish from Rameshwaram to Chennai. But the fishes had diamonds hidden them and as per the plot they get caught in the check post . Soon after realizing what had happened he kills all the cops and delivers the fish on time to Selvaraj (Ilavarasu) who recruits them for his illegal activities. Billa goes and murders Inspector Raghubir Sinha brutally at a brothel. He then goes back to meet his elder sister (Janaki Sabesh) and his niece Jasmine (Parvathy Omanakuttan) in a church. When they see his gun, they realize that he is involved in crime. Not knowing what to say, Billa simply walks away.
Kotiswara Rao (Manoj K.Jeyan) comes to meet Selvaraj and expresses his grievances of not being able to sell cocaine in Goa. Billa promises to sell it for him for a commission, and sets out to meet a local thug who betrays them and one of Billa's friend gets killed in the process. But Billa kills all the thugs very brutally with his other friends and evades the scene with both the money and the cocaine. Soon Billa meets Abbasi (Sudhanshu Pandey) in Goa who is Kotiswara Rao's Boss. He likes Billa and recruits him. He also introduces his girlfriend Sameera (Bruna Abdullah) to him. After a party held at his club he receives a phone call from the Russian mafia led by Dimitri (Vidyut Jamwal) telling him that his arms consignment has been held by the Indian coastal guards and he asks for his help. Billa and Ranjith retrieve the consignment for him. Both are congratulated by Dimitri for their work.
Soon David Billa learns that his sister has died, and he brings Jasmine with him to live in a big villa in Goa. Then he goes to Russia to meet Dimitri who happens to own an arms and ammunition manufacturing unit, with Kotiswara Rao where he signs a deal with Dimitri without the knowledge of Abbasi in presence of Jagdish (Rahman), a corrupt Interpol officer helping these underworld criminals. Abbasi becomes furious at Billa's daring and disobedient behaviour, and Kotiswara Rao adds fuel to the fire. Abbasi turns against Billa, and eventually gets killed by him in the series of events that follow.

Now Billa becomes the most powerful crime lord extending his business without any boundaries. He also gets Sameera, Abbasi's girlfriend. Dimitri then meets Billa and asks him to provide a safe passage for the arms consignment through India. Billa refuses as his commission payment would be very low. Angered by this, Dimitri hires Kotiswara Rao, along with a government minister and his son to eliminate Billa . Also some other problems for Billa, when the chief minister is murdered by one of his party ministers,and the blame falls on Billa as he would be the one at a party to speak last to the CM, and the CM happens to threaten to get him arrested. But Billa gets released on bail with Ranjit's help.

Billa's rivals conspire a plot to eliminate Billa and they kidnap Jasmine. Billa rescues her and he informs Sameera to come to a church to take Jasmine away to Malaysia to safety. But Sameera conspires against them and the goons with the minister's son arrive at the church, and hold both Billa and Jasmine captives. Billa is stabbed by one of the goons. After an argument, the minister's son slits Jasmine's throat. Unable to witness the death of his love, Billa overpowers everyone and kills all the goons including the minister's son.

This is the scene at which the film initially starts.
Meanwhile in Russia, Dimitri is having an auction for sale and Kotiswara Rao is also present with him . He shows his factory in his computer via a series of webcams and much to everyone's shock, Billa is seen destroying his factory in Georgia. He also sees his delivery train go off course. Angered with fear, he kills Kotiswara Rao for not killing Billa as promised, and he sets out himself to finish the task. The arms factory is completely destroyed by Billa and his friends. Dimitri arrives and follows his delivery train, when to his shock, the delivery train is blown by Billa who would be waiting for him on his own helicopter. After an intense battle, Billa kills Dimitri by throwing him out of the helicopter. In the concluding scene, Billa and Ranjith board a plane to Malaysia, and the former's goons eliminate the rest of the conspirators. Sameera is also killed in the process.