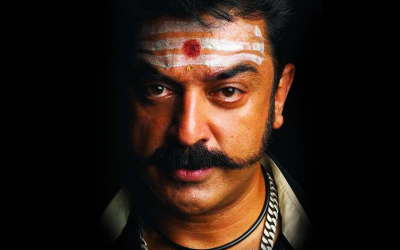 Movie Name
Virumaandi (2004)
Movie Name (in Tamil)
விருமாண்டி
Starring
Kamal Haasan, Abhirami, Pasupathy
Music
Ilaiyaraaja
Year
14 January 2004
Lyrics List
Story
The film begins with Dr. Angela Kathamuthu (Rohini), a civil rights activist and her cameraman in Madras Central Prison interviewing prisoners serving life imprisonment and awaiting the death sentence, for her PhD thesis in law, against the death penalty. When she enters the prison for the second day, there is a sit-in protest, demanding the reason for the sudden death of death penalty convict Narayanan, who secretly told Angela, the previous day, about immoral practices of Deputy-Jailer Peykkaman (Shanmugarajan). Angela meets Kothala Thevar (Pasupathy), who is serving a life sentence for assisting in the murder of 24 people in District of Theni. He tells his version of the story that led to his conviction.

According to him, the root cause of the problem is Virumaandi Thevar (Kamal Haasan), a happy-go-lucky rogue. Virumaandi has a large part of the land in CK Patti, their village, and has high underground water levels, which is eyed by every other farmer. Virumaandi lost his mother when he was four. He was taken to Chennai and later to Singapore by his father Thavasi Thevar. Even after Thavasi died, Virumandi still lived there, but at the age of 25, Virumaandi was convicted for a small crime. He was whipped and exiled back to India. He comes back to live with his paternal grandmother (S. N. Lakshmi) in CK Patti and to practice agriculture. His support to his uncle Kothala in his clash against Nallama Naicker (Napoleon) brings about a bonding between the two, as Naicker killed Kothala's father in a melee caused during a peace meeting between Thavasi and Kothala's father. Annalakshmi (Abhirami), Kothala's young niece, falls in love for Virumaandi. Kothala, with an eye on the fertile land owned by Virumaandi, does not object to the romance. An assassination attempt on Virumaandi is blamed on Naicker, and in the ensuing peace meeting of eight villages, Virumaandi's gang is verbally humiliated. Virumaandi goes to Naicker's village alone to take revenge at night, and Kothala's gang is forced to save him, where 24 lives are taken. Virumaandi saves all of them by his false testification so that he can marry Annalakshmi, but Kothala seemingly refused the marriage. According to Kothala, Annalakshmi was abducted by Virumaandi and brutally raped. She later escapes from him, comes home, tells what happened, and commits suicide by hanging herself. A clash between Virumaandi and Kothala takes place in which six henchmen are killed. Virumaandi then escapes and kills Naicker, but he is later caught by the police. In the 26 people murder case, Virumaandi testifies against Kothala's gang, getting them all 15-year sentences, while Virumaandi gets five years for raping Annalakshmi and then the death penalty for the six people murder case. Here, Kothala stops and says that God has given justice, but Virumaandi is still angry.

Angela tries to make Virumaandi talk, but Virumaandi verbally assaults her badly. Finally, Angela says that she is doing a PhD against the death penalty, as her father, who got her married to James by great hard work, was forced to kill James to save her from marital abuse. Her father was hanged in the same prison, and then she chose law as a career. After much resentment and objection, Virumaandi agrees to turn to tell his version to Angela. Virumaandi, 25, a manual laborer, was sent back to home from Singapore for taking responsibility for his cousin's fault. His only relation was his grandmother, who practices natural farming without artificial fertilizers and deep bore wells. Kothala had a silent eye on the fertile land owned by Virumaandi, as it had the only rich underground water availability. He treats Virumaandi as his nephew. Virumaandi falls in love with Annalakshmi after he tames her very stubborn bull at jallikattu. That night, his grandmother passes away, and two days later, an attempt is made on Virumaandi's life. Annalakshmi finds him and admits him in the hospital to save his life. Gradually, she falls in love with him. She teaches him the importance of apology and forgiveness, which are virtues. A clash at the peace Panchayat insults Kothala's gang, and their need for revenge infuriates Annalakshmi, who asks Virumaandi to apologize to the elders whom he insulted. He goes to apologize single-handedly at night to Naicker's village, but Kothala and his men, thinking he has gone to take revenge, come in groups and hack down innocents to death, despite his pleas. Kothala uses his clout to get out of the murder charge, but Virumaandi, who was involved in the bloodbath, is disturbed because he had to lie in the court to save Kothala and his kin. As part of the penance, he wills all his land for the villagers. Annalakshmi asks him to marry her and leave the village. He marries her at the village temple, goes away at night with her, and stays with his aunt, whose son he helped. They consummate their marriage that night.

Kothala's men come the next day, when Virumaandi was away, and abduct Annalakshmi, taking her home. Kothala and his gang forcibly get her married again, to Kothala's nephew Kottaisamy (O. A. K. Sundar). This is to ensure that Annalakshmi's share in property does not go to Virumaandi. Kottaisamy is then asked by Kothala to consummate his marriage immediately by raping Annalakshmi. Unable to tolerate, Annalakshmi commits suicide by hanging herself. Upon hearing the news, a distraught Virumaandi enters Kothala's house to kill the gang. He takes revenge by hacking Kothala's four men, including Kottaisamy, to death but finds Kothala holding his own son upside down on a staircase. Virumaandi places his weapon down, and Kothala escapes. Naicker shelters Virumaandi and sends him off to Chennai. Kothala and his men corner Naicker to hand over Virumaandi. A melee ensues in which Naicker is killed. Virumaandi turns up in court, where he finds that all evidence is framed against him. He is convicted of having raped Annalakshmi and killing her and later on being the main reason for killing the four relatives of Kothala, and also the main accused for the murder of 26 lives in Naicker's village. He is sentenced to first six years in jail, followed by death by hanging.

While leaving the jail, Angela's cameraman discreetly shoots a conversation between Peykkaman and other jail wardens and convicts to bump off Chief Jailer Jayanth (Nassar). This is because all of them trafficks drugs into the prison, and this is now under investigation by Jayanth. Peykkaman also reveals that Virumaandi never killed anyone, but his charge sheet got him a death sentence. A revolt among the jail staff leads to a jailbreak, as Jayanth gets stabbed and Virumaandi saves the vital evidence and Angela from Peykkaman and his henchmen. When Virumaandi and Angela are about to leave the jail to outside police, Kothala stabs Virumaandi, proving that Virumaandi was true all the time. Virumaandi then barehandedly kills Kothala, and they escape. The riot is stopped, and Angela presents the evidence in court. Angela applies for Virumaandi's clemency to the President of India, stating that the six-year prison sentence is enough as he did not commit any other offence, and to release him immediately. Virumaandi, on TV, pleas for a quick judgement, either to reach Annalakshmi by hanging to death or to live life as a silent man, seeking retribution.

Finally, an epilogue denotes a note that the death sentence should be abolished.