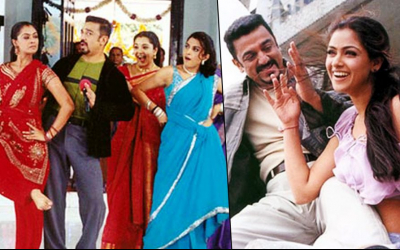 After marriage, Ram quits his playboy character and remains faithful to Mythili. One day, when Ram prevents Hegde's ex-girlfriend, Nirmala, from committing suicide, Mythili misinterprets the situation. She presumes that he is having an affair with her and leaves him to be with her parents. Further misunderstanding occurs when he sets out to meet Mythili, drunk, in the middle of the night and enters the wrong house.

To take his mind off Mythili for a while, Ram's four friends drive him down to Bangalore and rent a room to hire call girl Maragathavalli alias Maggie. Ram, who is still not able to forget Mythili and does not wish to betray her, gets into a fight with Maggie. To salvage the situation, Iyer hurries back to Maggie's room, only to find Maggie dead. Panicking, Nair, Iyer, Hegde and Reddy decide to discreetly dispose of the body in spite of Ram's pleas to call the police. They manage to roll the body in a blanket, dispose it in a dry river and drive back to Chennai to return to their normal lives.

Ram discovers a cache of diamonds inside Maggie's mobile phone. He does not report about it to the police, fearing he would be arrested for murdering Maggie, which he did not commit. A few days after, the friends get very nervous when they learn of a news article regarding the discovery of a dead body in the same area where they disposed Maggie's body. At that time, the wives of Ram's four friends plan to unite Ram and Mythili by holding a party on the traditional festival of Ugadi. The wives invite Mythili to the party to be reunited with Ram.

At the party, the supposedly-dead Maggie appears, demanding her diamonds back. Maggie then reveals the truth behind her death. The diamonds belong to a smuggler, and that she stole it from him for her own personal gain. She chose to merely fake her death as she realised that the diamonds would be temporarily safe in Ram's possession. She also blackmails Ram that she would reveal about their rendezvous in Bangalore to Mythili if he does not give the diamonds back. The smuggler then arrives and kidnaps Maggie, Ram and his friends. Mythili spots Ram and Maggie together. She again believes that Ram has not changed his ways. Mythili, along with an undercover police inspector, follows them.

While the smuggler demands his diamonds back, Mythili appears. Upon seeing Ram and Maggie together, she believes that Ram is having an affair with Maggie in front of his friends and the smuggler instead of believing that Ram, Maggie and his friends are kidnapped. She swallows some sleeping pills, which turns out to be where Ram hid the diamonds. Mythili decides to commit suicide and runs away. Ram and his friends save her and help the undercover police inspector arrest Maggie and the smuggler. Mythili, on being informed by Ram of all that happened, promises to reform her suspicious ways. The two then reunite.